VOICE OF AN ANGEL

Mom, dressed for her first date with Dad! 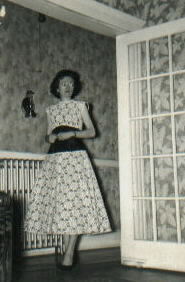 When someone so close to us and whom we love so much is near the end, we feel their pain as they age and we would do whatever we could to see the Mom (or other loved one) as we remember them . . . even one more time.  This week marks another anniversary  of her passing.  She felt no pain in passing while asleep and just didn’t awaken this side of heaven.  She died holding hands with Jesus with a big smile on her face, just like my Grampy did.  If your morning quiet place seems to have a larger angel choir, that’s Mom.  No matter how many things she could no longer do toward the end, she was always singing and I am sure she still is!  Likely, the angels in your life are singing with her!

The last thing she and I said to each other was to smile and say “I love you!” it was a sunny spring afternoon and the birds were singing!

NOT JUST AN ORDINARY DAY!

Which surely shocked her

And the world was changed

Comments Off on NOT JUST AN ORDINARY DAY! |

Darkness weighs upon my soul.

Too heavy for me to discard,

Is that light I see

Or just an illusion?

Walking slowly toward the Light,

I am brushed by gentle wings of love.

My burden seems to have been lifted from me

“He Asked her WHAT?”

Which surely shocked her

And the world was forever changed!

Did I See An Angel?

“For he will command his angels concerning you to guard you in all your ways.”  Psalm 91:11

Does God still send us angels?  If He does, in what form does He send them?  Would we know it if we saw one?  I had a vision of an angel a couple of weeks ago at church.  It was at night and I was one of just 2 or 3 folks in a prayer vigil.  I later mentioned what I had seen to one of them but he didn’t see what I had.  Does this mean it wasn’t there?  Could it have been just the way the light had shown through the window at that precise hour of the day?  I began to think so.  Still, I did continue to think of angels surrounding us and recalled that someone had prayed for me and as she did so, she had a vision of angels surrounding me.

Hmmm . . . I wonder.  My life has been stressful for a while.  I like the idea that I have angels protecting me.  Still, I wondered what I really was seeing that night at church a couple of weeks ago.  A voice inside argued against my hope that it truly was a vision of an angel and not just light playing tricks on my eyes.  Then something happened!  I was at church in the evening again recently and in similar light conditions.  I was sitting in the same area as I had the night in question.  This time when I looked up, I saw just the ceiling.  If it had only been the light’s reflection through windows that had caused me to see what I had seen that night a couple of weeks ago, I should have seen the same thing again.  I didn’t, though.  However, I felt the love of the Lord and felt a peace flow over me and through me profoundly as I realized I had indeed seen a vision of an angel that other time.

Did my not seeing one this time mean they weren’t there with me?  No, it did not.  Sometimes we need to see things with our eyes and are blessed with the opportunity.  Other times, just knowing in our hearts that we are loved is more than sufficient.

“Though you have not seen him, you love him; and even though you do not see him now, you believe in him and are filled with an inexpressible and glorious joy”  1 Peter 1:8

Comments Off on Did I See An Angel? |